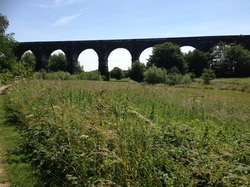 The industrial revolution had a great impact in the area, and two of the world’s most significant transport legacies cross one another in the Sankey valley, namely the world’s first commercial canal (Sankey canal) and the world’s first passenger railway line (Liverpool – Manchester). Ironically the birth of the railway was to herald the demise of the canal network, many sections of the Sankey canal fell into disuse and disrepair and were filled in during the 1960’s, George Stephenson Sankey viaduct (nine arches) still carries the mainline Liverpool – Manchester, and stands as a monument to our engineering heritage.

Stephenson’s huge viaduct had carried the massive railway across the sankey valley which was creating historic crossing, a place in England’s transport history. It was the first English Canal of the industrial revolution being crossed by the first planned passenger railway.

In the 18th and 19th centuries, a grand racecourse stood on newton common which was famous throughout the country. Race meetings were last held on this site in 1898. The racecourse had its own railway station. After 1898 racing was switched to the newly built Haydock park course about 3km to the North east.

In the 1800s there was believed to be a plan to close down the Newton races. People did not have to pay to watch it , betting etc. it was all free and this is because the races was on common land, people would say that the only real charge was the to view the event from the grandstand. Some people said that the closing of the racecourse had been preplanned beforehand.

On a site known as Vulcan Bank the Vulcan Foundry was established in 1831 to build locomotives. Under a partnership between its founders. Charles Taylour and Robert Stephenson, the works flourished. Skilled workers were attracted from Lancashire and further afield. To house their workforce, Taylour and Stephenson laid out a new village beside the works. Originally three rows, the village grew as business boomed. The Vulcan Works produced some of the world’s first locomotives and engines many of which continue to be in service.

The workers of Vulcan Foundry and the Liverpool-Manchester railway was closely linked by the village.in 1986 it was declared a conservation area. It is one of Britain’s last privately owned villages of its kind. 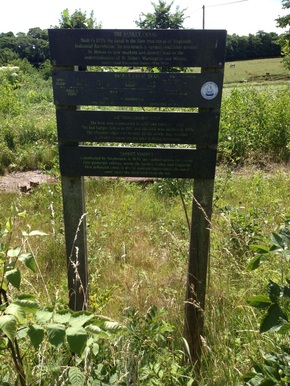